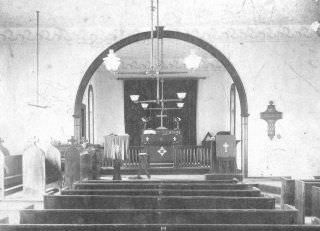 Emmanuel Episcopal Church was established on January 26, 1862, in the hamlet of Goodson — later known as Bristol — Virginia, by sixteen determined men and women, only nine of whom were communicants. A brick structure owned by the Masonic fraternity and known as the Academy Building was secured rent-free; but, as the Civil War was raging, its use was short-lived due to its conversion to a military hospital.

A nearby Baptist church allowed parishioners to use its building for a 9:00 a.m. service, with the proviso that it be cleared for the Baptists to meet two hours later! This meeting place was used until February, 1869, when a frame structure on the corner of Moore and Cumberland Streets was completed. The edifice was consecrated in October, 1872, by the The Right Reverend John Johns. 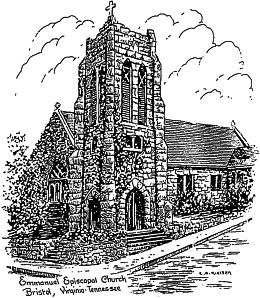 In 1919 the building was sold, and a house and lot on the corner of James and Cumberland Streets were purchased. Plans for a new church of native gray limestone in the Gothic style, modeled after the 13th-century Church of St. James the Less in Sulgrave, England, were approved and construction was begun. During the interim the congregation met at the YMCA. The present building formally opened for services on June 5, 1921, and was consecrated by Bishop Robert Carter Jett in January, 1926.

The decades since the completion of the present building have seen many changes. The nave and sanctuary have been enriched by the addition of vibrant stained-glass windows and over 100 hand-crafted needlepoint kneelers at the Communion rail and pews.

As the need arose for more space to accommodate the increasing physical needs of the parish, the rectory was demolished and an adjacent lot was purchased. Soon a two-story parish house adjoining the church was ready for occupancy. Dedicated in 1960, it contains a large assembly hall, spacious kitchen, and several Sunday School rooms on the upper floor. The Bledsoe Chapel, created and named in memory of a former rector, Parish offices, nursery, boiler room, and additional Sunday School rooms are to be found below. A lift provides accessibility to all level of the building. The St. Francis Courtyard, which houses a garden and the parish’s Columbarium, was created within the confines of the church yard and parish house.

Beginning in 1990, The Literacy Academy of Bristol (LAB), brainchild of a city resident, was housed in the church’s undercroft. The founding premise of the LAB was to provide preparation for those desiring to earn a General Equivalency Degree (GED). Tutoring in reading and other basic skills required for the GED were offered to them and to other adults seeking employment or a position upgrade. Later, training in computer skills was added to the LAB’s curriculum. When the new Bristol Public Library opened in 2004, the LAB, now a United Way agency, moved to that site. During the almost 15 years that the LAB was at Emmanuel, the parish charged no rent, considering it part of its mission to the city.

In the early 2000s, the parish acquired property across the street on the east side of the building. The house (the "green house") which had stood there in disrepair for many years was demolished to make way for a Labyrinth and additional parking.

Parishioners at Emmanuel have modernized the church building over the years, enhancing its beauty as well as increasing its usefulness. A successful Capital Campaign, Envision, completed in 2012 allowed many long-deferred building infrastructure projects to be completed, ensuring on-going occupancy of our beautiful building for many years into the future.

From 1981 until 2019 the parish hosted a Community Christmas dinner, serving an average of 500 meals on Christmas Day evening. All phases of the dinner were served by parishioners of the church including cooking, waiting tables, transportation, publicity, and clean up. The event was fully funded from a trust and memorial gifts.

We welcome you to visit our beautiful church, walk our Labyrinth, and join us for worship on Sundays and Wednesdays.

Top photo: The original Emmanuel Episcopal Church, at Moore and Cumberland streets, was consecrated in October 1872.